BETH PAINTER (Chris Gorman) Beth is pleased to be making her first appearance with Chatham Players. NYC credits include Crimes of the Heart (Lenny), Hamlet (Gertrude), Snow White (Queen), and Counselor At Law (Cora). Other favorites include Moon Over Buffalo (Roz), Annie (Ms. Hannigan), Nuts (Claudia), How To Succeed… (Hedy LaRue), and acting in Murder Mysteries. Beth has worked as a Drama Therapist for senior citizens and as a teacher. Thank you, Gerard. I know this one was huge!

KEVIN GRAY (Ken Gorman) Kevin has performed throughout the region and this is his first Chatham Players production. Favorite roles include Arnold in The Boys Next Door, Alfred/Sam in Romance Romance, Anatoly in Chess and Marvin in Falsettos. His Nick in Baby won him AVY Award’s Best Actor in a Musical. He thanks his wife Sandy and children Keaton, Colin and Chase for their love and support.

LAUREN MAZZARESE (Claire Ganz) Lauren has a B.F.A. from NYU’s Tisch School of the Arts. Some of her favorite roles are Mo (Parallel Lives…), Louise (Always…Patsy Cline), Desdemona (Othello) and Mama Rose (Gypsy). When she’s not acting, Lauren teaches private voice lessons and works as a dialect coach in NYC and New Jersey. For Joshua, with love.

VINCENT BALZANO (Lenny Ganz) Vince has appeared and disappeared many times. In the bio for his first play (George Gibbs in Our Town), performed at a little theatre in the west village of NYC at the age of 16, he stated that “he hopes some day to act and direct well into the next millennium”...Boy, time flies!! Most recently he directed Black Comedy at the Summit Playhouse where he currently “acts” as President.

FRANK MALVASI (Ernie Cusack) Frank most recently appeared in Work and Play for Jersey Voices 2002. For many years, New Jersey audiences have seen him in numerous productions with the Attic Ensemble and the Civic Theater Of Hudson County. Frank’s New York, Off-Off-Broadway credits include productions of Ice In April, They Came To A City, and Heaven Can Wait.

ROBIN JOYCE (Cookie Cusack) Robin Joyce is delighted to be returning to CCP since last appearing in The Unsinkable Molly Brown about a million years ago. Favorite roles include Miss Hannigan (Annie), Charlotte Cardoza (Titanic), Sally (You’re a Good Man, Charlie Brown – 2002 RECT Nominee for Featured Actress in a Musical), Penny (You Can’t Take It With You), Alyson (A Grand Night for Singing), Clairee (Steel Magnolias) and Mrs. Boyle (The Mousetrap). NYC cabaret and concert performances at Don’t Tell Mama, Danny’s Skylight Room, Symphony Space, CAMI Hall, among others.

CHAZ TURNER (Glenn Cooper) Chaz is delighted to be in his first show with Chatham Players. Previously, he's been seen in musical roles for the past ten years in central NJ and PA. Chaz dedicates this performance to his loving wife, Stephanie. Among his favorite shows are: Hello, Dolly!, She Loves Me, The Nutcracker, Pirates of Penzance, Fiorello!, Camelot, Man of La Mancha, Romeo & Juliet, and Fiddler on the Roof.

DIANE KAHAN (Cassie Cooper) Diane is pleased to perform her first show at the Chatham Playhouse. She has been acting since age 7. Some of her favorite roles have been Lucia in a Shayna Meidal and Sylvia in Sylvia. Diane would like to thank her boyfriend Jim for his love and support during this production.

PETER HORN (Officer Welch) Peter has always had an interest in law enforcement. His favorite toys as a child were a book of play parking tickets he would use to issue summonses in the neighborhood and the handcuffs with which his elder brothers kept him in line. He is delighted to return to CCP after his role as Mr Collins in Pride and Prejudice and a pole-dancer in Chess.

JOËLLE M. BOCHNER (Officer Pudney) Joëlle has enjoyed numerous roles on Chatham's stage. In addition to this cameo, she has performed in A Christmas Carol, Pride and Prejudice, Blithe Spirit, Six Degrees of Separation, Fame and two of Jersey Voices' productions. She has also worked backstage on numerous shows since 1997.

Who's Who on the Production Team

ART NEILL (Director) Some of Art’s most recent directing projects have included Die Fledermaus for Opera at Florham, Opera House Party for the State Theatre in New Brunswick and The Pirates of Penzance for Cabrillo Music Theatre at the Thousand Oaks Civic Arts Plaza in California. At Plays-in-the-Park in Edison, he directed over 15 plays & musicals, including She Loves Me, Me & My Girl, Anything Goes, Brigadoon, Funny Girl, The King & I, Peter Pan, The Pirates of Penzance, and Forever Plaid. During his 5 year tenure as Executive Director at The Villagers Theatre, productions included Nunsense, What the Bellhop Saw, The Philadelphia Story, and The Robber Bridegroom. Art has co-directed and performed in numerous Van Zandt/Milmore comedies, and served for two years as the Artistic Director for The Unlimited Potential Theatre Company, a project of Very Special Arts, NJ. It is said that after directing last year's "The Desperate Hours", Art appeared in a new farce, portraying an egocentric Russian ballet star. (we did mention farce, right?) and directed the musical "Titanic". It is reported that Art lives in the sleepy little bayshore town of Keyport with his lovely wife Jacqueline, and their three golden retrievers. Mr. Neill neither denies nor confirms these allegations. 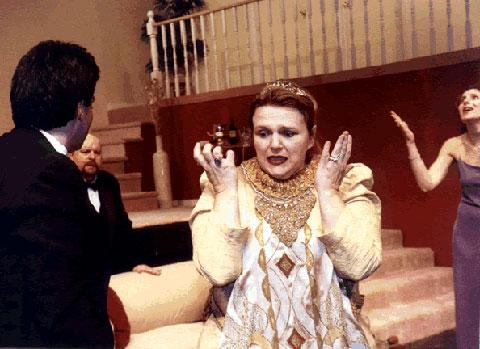 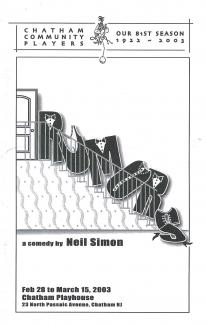 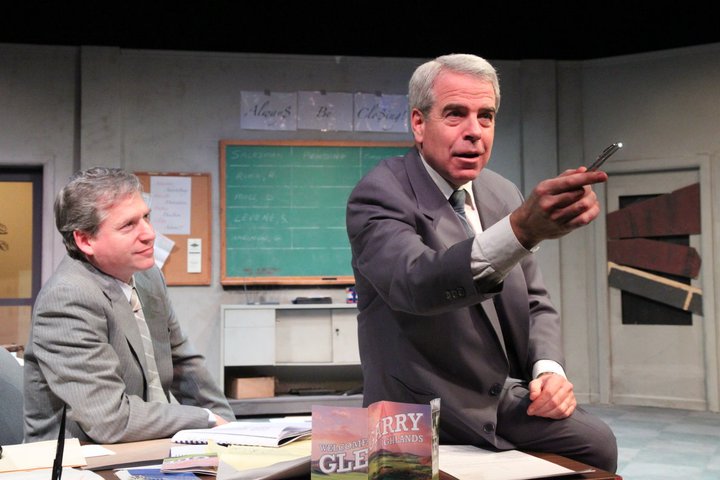 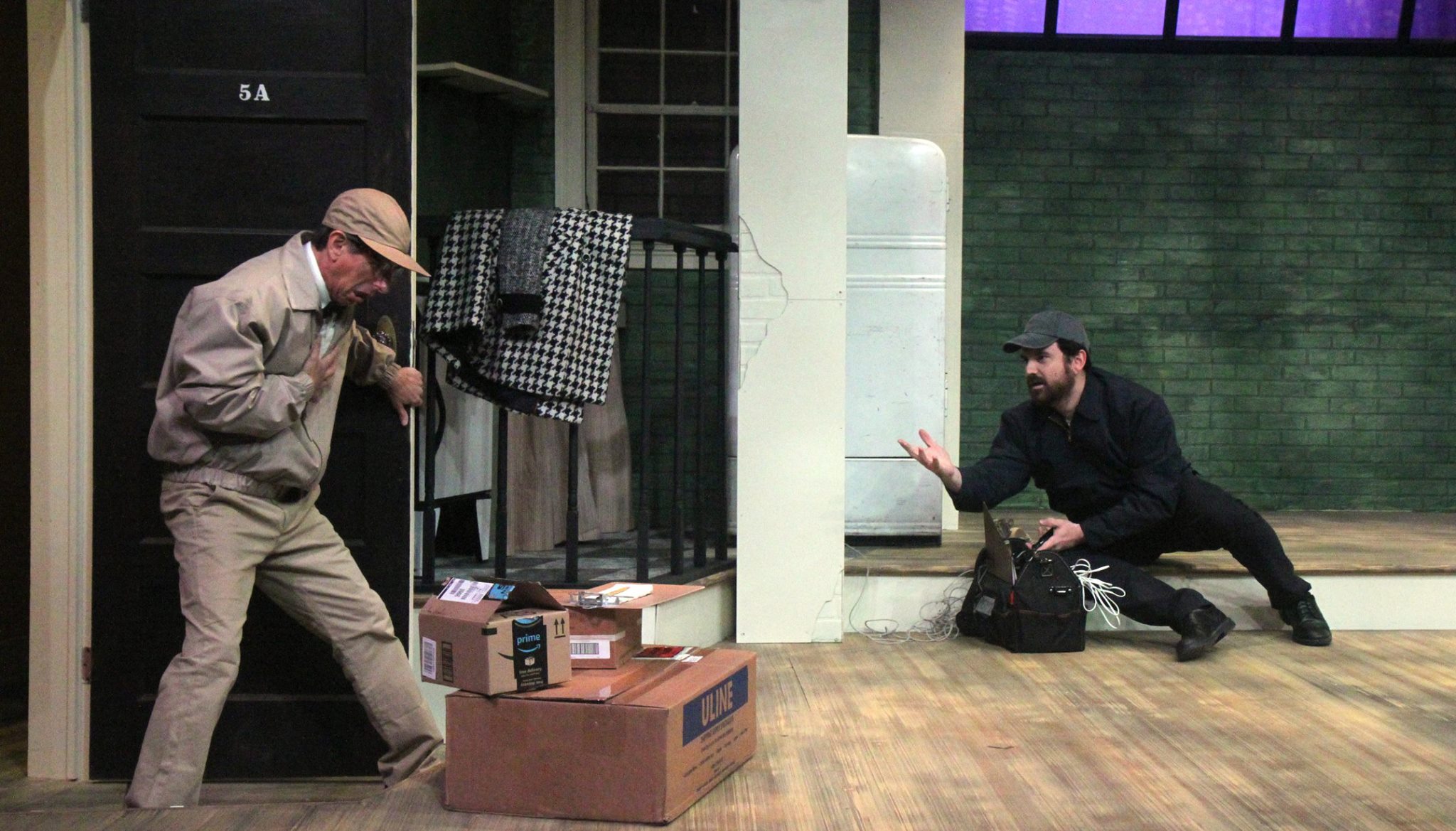 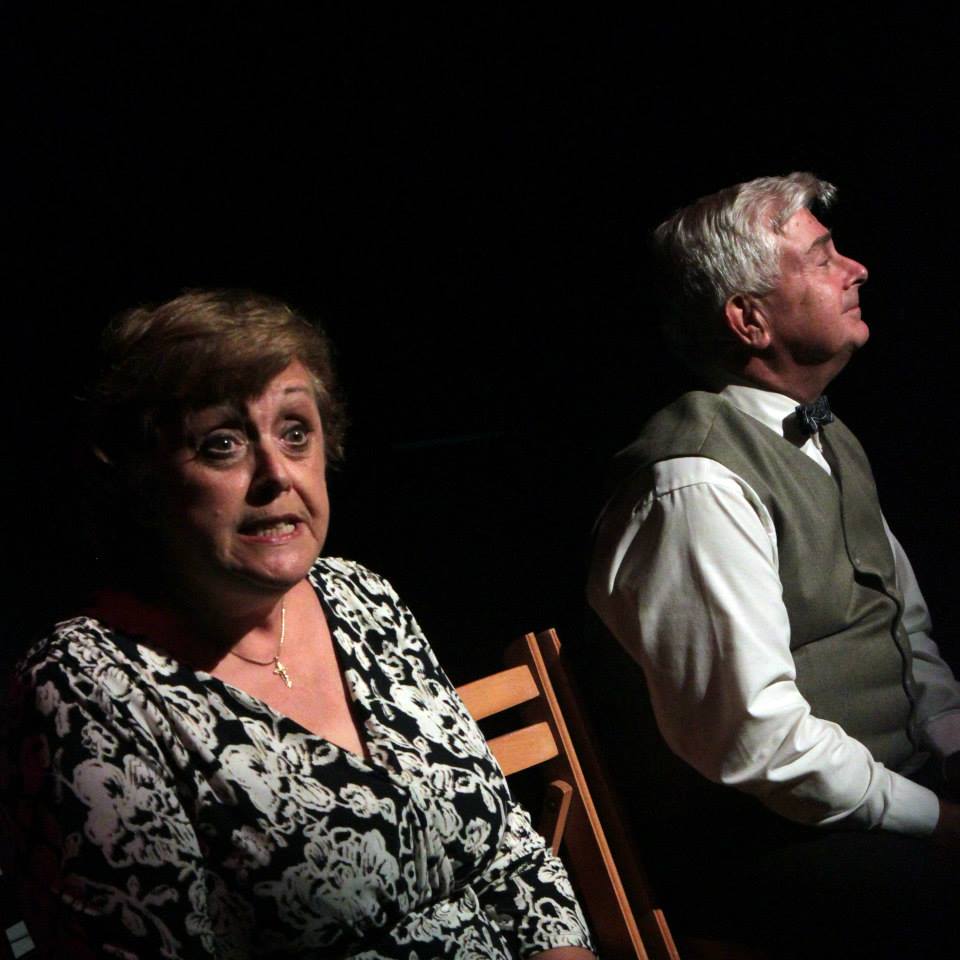 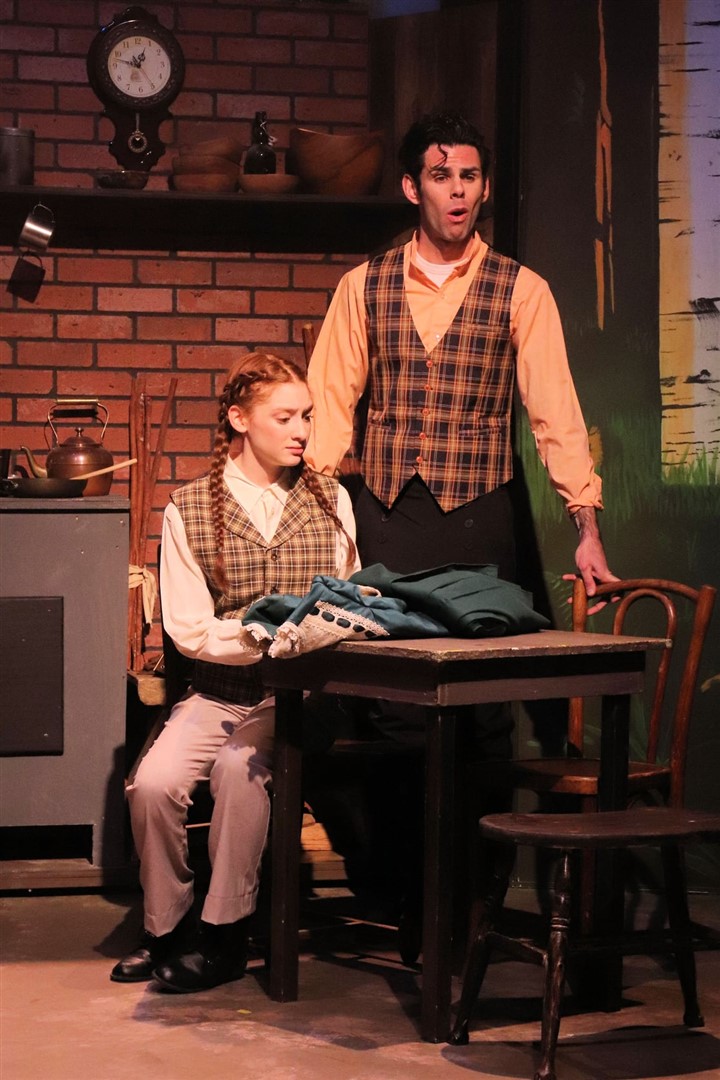 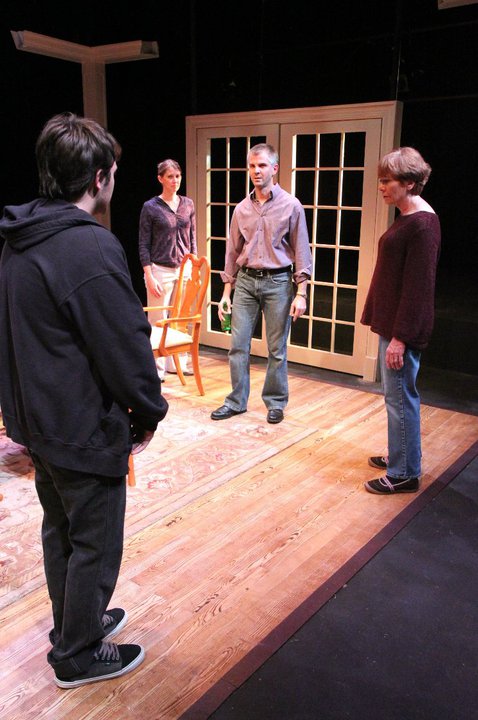 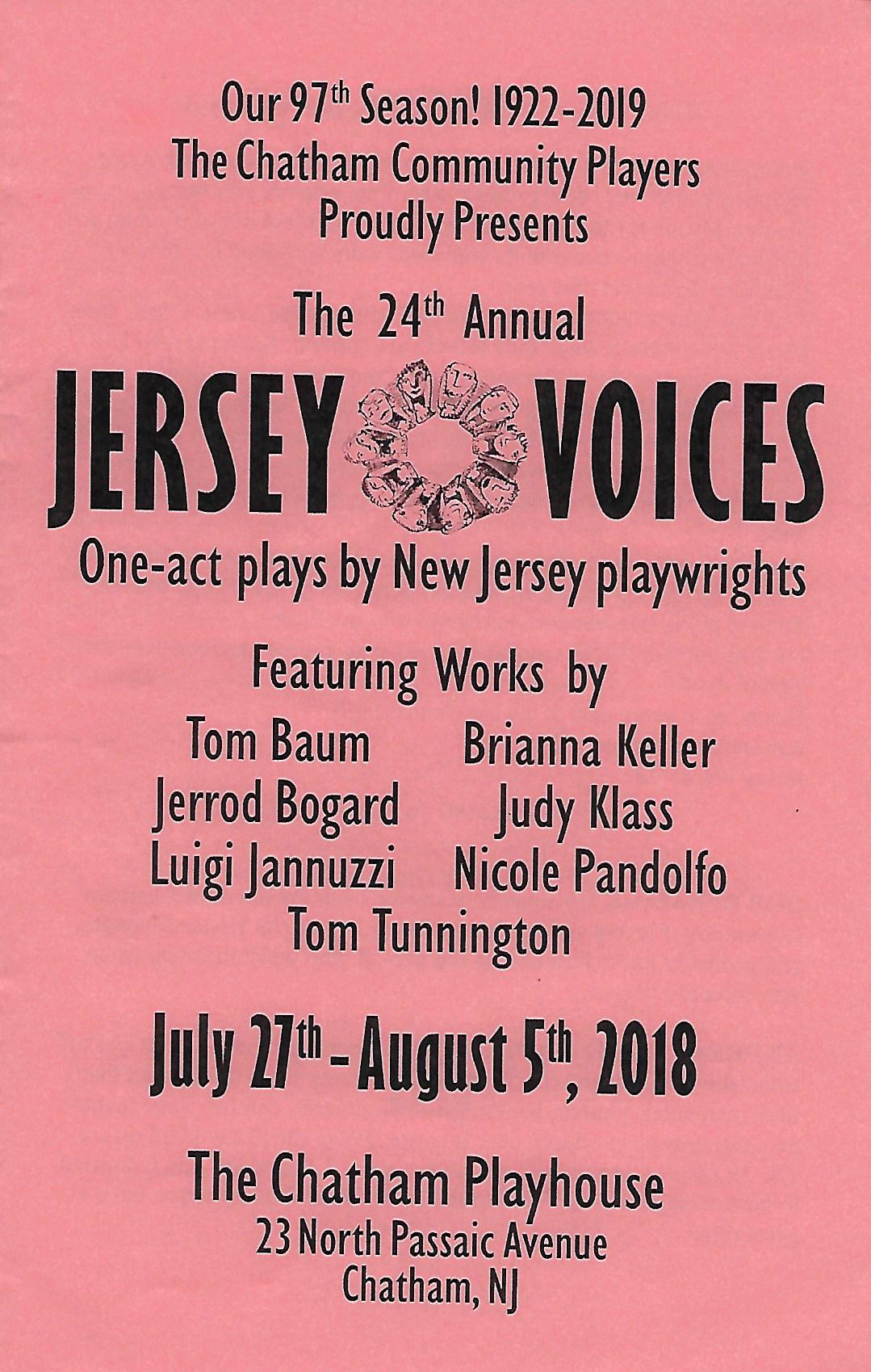